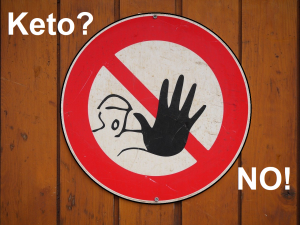 Top 10 Not Keto Restaurants Chains.  There are an amazing number of restaurants where you can find at least some keto, or low carb foods on the menu.

There are some no keto restaurants that literally have nothing you can eat. Well, maybe the water! Then there are a some that have some lettuce. No really, that’s all you can eat there.

Just don’t even bother to go there. You might get snookered into eating something that looks OK but isn’t really.

You may have heard about all the shenanigans after they re-released their chicken sandwich to compete with Chick Fil-A. There were supposedly bootlegging operations, and even violence around people trying to get their sandwiches. It was because they would sell out as soon as they became available.

We can tell you it wasn’t because of Popeye’s Chicken keto menu, because there is none. Not even the sides. Don’t bother.

On to number two of the top 10 no keto restaurants chains.

Boston Market and keto don’t really go together well. While you can make a salad of lettuce, tomato, onion, avocado and parmesan cheese, topped with oil and vinegar, that’s about all the low carb you are going to find at Boston Market.

Technically, there is a tiny sliver of Boston Market Keto, but hardly enough to make a trip there. There are so many other restaurants that have at least one main protein meal you can eat.

Keto at Chick-Fil-A is like bigfoot. People think they have seen it, but it’s an illusion.  Even the meats are marinaded or otherwise tainted with sugar in the sauces.

You can get a salad with a hard boiled egg, some shredded Monterey Jack cheese, tomato, onion, and lemon juice. But that’s rabbit food, and not what you need to feel satisfied in your low carb diet.  So many other places can satisfy your protein needs, that you should only bother with Chick-Fil-A in dire keto emergencies.

Friendly’s Has No Keto

Friendly's  Keto is as unfriendly as it gets. But actually for different reasons. The grilled chicken, though sugar and grain free, includes a bunch of unhealthy artificial ingredients. That’s the hallmark of non fresh, made to last a long time without spoiling , franken foods.

Their non keto hamburger meat as well as turkey burger have sugar. So your low carb dreams of keto at Friendly’s just met an unfriendly demise.

They do have lettuce, tomato, onion , and avocado, if you are traveling with your rabbit and he needs something to eat.

These have the usual toppings that can be made into a salad if you absolutely must eat there.

Sorry, lettuce and guacamole only.

Some veggies and cheese for a salad

Same. The veggies used for toppings can be made into a rudimentary rabbit salad.

Starbucks actually has one kind of side you can eat. Prosciutto and hard boiled eggs. So it may not be fair to put it here, but it’s pretty slim for an actual meal.

Slim pickin’s salad made from taco toppings. Meats all have sugar.

They do have egg and heavy cream for your coffee. So technically, you could get through a breakfast there. But that’s about it.

That's the Top 10 No Keto Restaurants that are Chains.  There are actually a whole bunch of restaurants out there where you can do quite well eating keto or low carb. Just skip these.